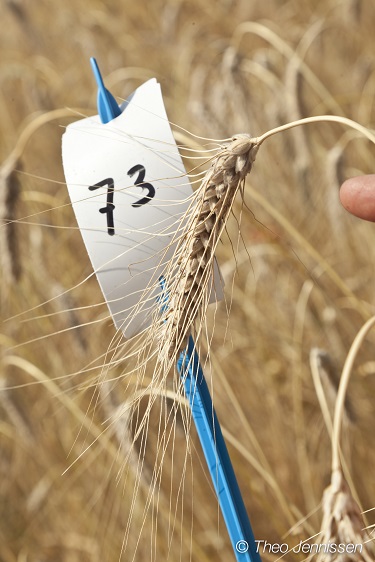 Read here. It is an European project, financed by EU Horizon 2020 Programme (project number 633571). The goal is to increase diversity in crop production and food supply. The Dutch Louis Bolk Institute is involved in this project from 2015 - 2019. The crops, tested, are traditional wheat varieties (einkorn, emmer and rivet wheats) and broccoli and tomato. For the wheat project, the Louis Bolk Institute works with Louis Dolmans, Doornik Natuurakkers, Bemmel (near Nijmegen). Me, Ineke Berentschot, (organic baker from 1981-1991; from than on writing about bread and grains in my blog wiebaktmee, write for professional bakers about grains, about sourdough, and give lessons to homebakers) and Louis organize from 2015 till now and hopely next years

Happy Walking in the Grain

We met when I walked on the fields to look at grains. Louis the farmer came along, was so friendly as to show me all his grains. We liked this so much that we said: he, why not do this with everyone who wants to walk with us. So we organised these 'grainwalks' every wednesday evening from end may till the grains are harvested. My old friend Günter Vieten († ) invented the name Happy Walking in the Grain. It is fun all these years. We are there at 19 o'clock; everyone who shows up walks with us, nothing organized; we look who showed up and we go walking. Louis talks about the grains, about the birds that returned from the time he is an organic agriculturer, about the wild flowers that show up. I talk about baking with these grains; we eat a slice of Doornik bread afterwards. Louis and me do it for free, everyone pays 2,50 and this all goes to the foundation Zaadgoed. For an impression on these walks, see here the 'picture movies' of artist/photographer Theo Jennissen; one of the  last walks 2017 and one of the middle walks, one of the first walks 2017. For all of them, see his vimeo account and scroll down till you see the grainmovies. The Diversifood crops at Doornik are sorts of einkorn wheat, emmer wheat and rivet wheats. Einkorn and emmer have hulled - covered - seeds, Rivet nosy. Here you can see the sorts that were 2017 at the field. Click on the picture and you see every einkorn, emmer and rivetwheatsorts better.

are intriguing. They grow so beautiful on the fields of Louis Dolmans. They are tall, they have huge spikes, they bow and are strong enough to wear the heavy spikes, sometimes they have a goose/neck between spike and stem. Rivet wheat is Triticum turgidum - also named Poulard, Cone or English wheat - that evoluated from other descendants of Triticum Dicoccon -  or Emmer wheat - like Durum, Polish, Khorasan and Persian wheat. Is might have changed from these wheats while coming from the fertile crescent via Mediterranean towards colder climates in the direction of N- and W Europe. 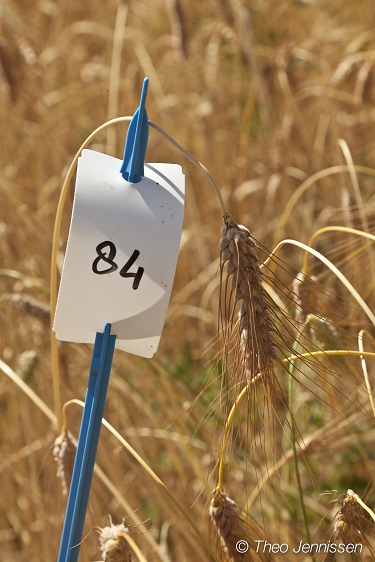 Diversifood had written about this Rivet wheat. It talks about 'the forgotten species'. I am very very glad that Louis Dolmans at Doornik Natuurakkers has grown these Rivet wheats for four years now. I myself used to grow Kamut in my garden and saw how strong and big the spikes were. Now that I've seen different Rivet wheats the last years and this year, I really think that the kilo's for the farmer might be worth to grow them. I also see that the stems stay upright (at poor soil, don't give it extra manure, same for all the old grains; they are wont to a minimum manure because the farmer had a minimum). I am looking forward to see

whether bread could be made of these Rivets.

Why not? Durumwheat also can give good breads. Kamut wheat can give good breads. The new Tritordeum (durumwheat and barley) can give good bread. So why not Rivet? Baking qualities should be comparded not with this modern industrial baking, but with the time people used to bake bread of these grains: slow, with the hand, with sourdough. I found a study by Peer Schilperoord (Switserland, original from Holland) on page 165 that Nonette de Lausanne should give very 'starchy' grains, so not good for breadbaking; very good to make grits of it. Yet, I would like to try and make bread of this Rivet.

1. What are the breadbaking qualities of the Rivet wheats (as for the Emmer wheats and Einkorn wheats). If there are not enough kilo's to make bread of them: what are the theoretically qualities (Zeleny value which says someting about protein and proteinquality;  and falling number which says something about the amylase activity) 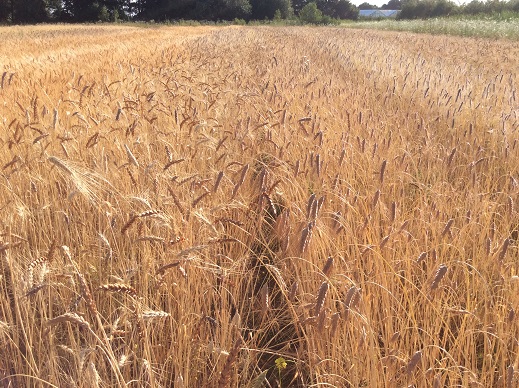