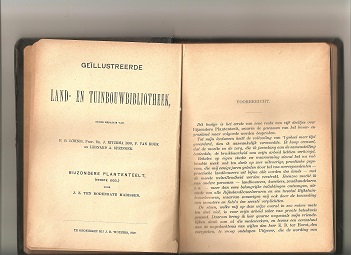 Jarkko Laine - of the excellent online magazine Bread - and me were skyping about how many wheatraces there used to be in our countries - Finland, the Netherlands. I promised him to send information from some old agricultural books about old wheatraces in The Netherlands, special about Wilhelmina and Juliana wheat. By the way, how should we call this new 'wave' in bakingland: to bake with heritage grains, old grains, landrace grains? Yarkko choosed the name 'old grains'. Yes, from now on I am also going to use this name. Baking with old grains. Because 'landrace grain' is the name for old grains, multiplied by the farmers themselves, so grains that grow very good on that place in that climate on that soil a.s.o.. Grains from the early seedcompanies, are - in my definition - still old grains.
My definition: old grains are grains, grown before the use of artificial fertilizers and pesticides (about 1950). Because from than on, the grains can grow everywhere and not only very locally.
On this page I take you with through three old books. You can read how diverse the races of wheat were. Enjoy.

This book says that we almost only have Triticum vulgare Vill. But we have also a small amount of other races.

First the races that are not the Triticum vulgare Vill.
Triticum turgidum, in Dutch called 'buikige tarwe' because of the round 'belly'like seeds. Most grown in France, Italy on poor grounds. In the Netherlands they know the Rivett's baardtarwe, looking very promising, but has no good quality (for baking?)
Than the Triticum durum, without importance for our country.
Triticum polonicum is mostly grown in N-Africa.
Triticum Spelta L. is known in The Netherlands as summerwheat, 209 ha in 1904 so not so much.
Triticum dicoccum or Emmer or Zweikorn is not sown in our country.
Triticum monococum either. It is a the most strong and the most strong tillering wheat, but the amount in kilo's is so less, that it has just importance for middle/poor soils in The Netherlands.

Than the races of Triticum vulgare Vill.

You can divide the races in winter/summer, in beards or not, in colours of the seeds from white till red, in colour of the straw from white till red, in 'glazig' (hard) or 'melig'(soft) grains, in way of tillering, in firmness of the straw, in resistance to illnesses.
The book goes on: of course we cannot write here all or many races of Triticum vulgare Vill. We should just mention the races which are used most. They can be divided in three main groups:
1. English Squarehead
2. Zeeuwsche Tarwe
3. Geldersche Tarwe

1. Rode dikkop or Squarehead, in The Netherlands since 1874, both winter- and summerwheat. 40-50 hl per hectare. The experience learns, that the race gets less in quantity and strong plants throughout the years, so 'now in 1907' there are newer races.

3. IJtarwe, with velvet like skins, came from the IJ-polders, now in Groningen and Friesland (but not much). 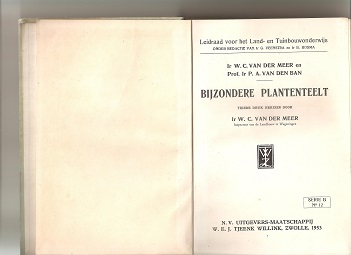 9. Hundredfold, from England, grows in Groningen, Friesland, not much

10. Roode Profilie,  Northern Holland, not much

12. Limburger tarwe of risweit or Petit rouge, looks like 11, grows on the löss soils in Limburg and Belgium. The seeds fall out soon.

15. Poolsche tarwe, grown here and there in the Betuwe, long straw, much tillering, not much kilo´s 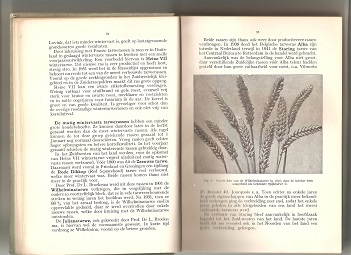 19. Japhet zomertarwe, developed from 18, according to mister Mansholt a very important wheat for The Netherlands

24. Wilhelminatarwe (from Spijk and Squarehead), born on 11 september 1901, an excellent race that is multiplied and is available on larg scale as seed to grow.

This book divides the wheatsorts in 4 categories: 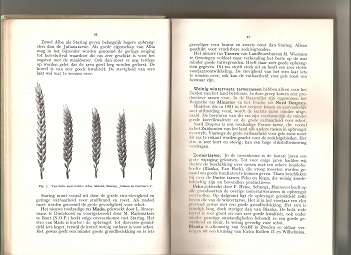 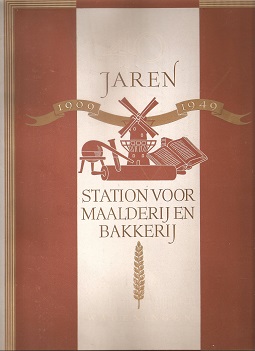 In fact I red that we've always been eating international bread from 1900. The wheat for our bread was merely imported. Wheat that grew in the Netherlands was mostly milled for the cattle. (Also part of the imported wheat).
From 1900 till 1914 (when the first World War started) the wheat came mainly from Russia and from 'Donau countries'. The wheats were apart used and honoured (so not as melange); it was well known where they came from. Amiza winterwheat from Odessa, Novorossisk aso, Ulca summerwheat fromCherson, Nicolajew, Siberian wheat from Archangel and Wladiwostok.
From 1918 till 1940 the wheat came mainly from the United States. Hardwinter I and II, Redwinter II, Spring I, Soft White Pacific. From Canada: Manitoba 1-3, Atlantic, Pacific. From Argentinia Bahia Blanca, Necochea, Rosafé, Barusso, Entrerios. Than we had wheat from the Donau countries and a bit from Russia.
After 1945 most wheat is imported from the United States.

This book says that from 1900 till 1950 the real landraces became ´grown´ races, grown by seed companies, or by rich farmers. Real Dutch landraces are Zeeuwse tarwe, rode Kleefse tarwe, Frankensteiner. They are replaced by ´grown´ races which again were replaced by better ´grown´ races´.
The first 'grown' winterwheats are Wilhelmina, Juliana, Carstens and the summerwheats Mansholt´s witte, Carma a.s.o.
And ´now´ (1949) we have Juliana, Alba and Staring CB which are 66% of the winterwheats.

In 1930 there came a law - the 'maal- en menggebod' - to protect the Dutch farmers-in-crisis: a certain percentage of the wheat, milling to breadwheat, should be from Dutch origine. This way the Dutch farmer was secure, that he could re use a part of his seed to sew for the next season, secure that his wheat will be bought.
(It might be a good idea to do this anno 2017; we really would learn a lot to grow breadwheat here ourselves!!!, I.B.)

The landraces, written in 1900 by F.F.Bruyning Jr and A.Boonstra, differ a lot from the races in 1949, who are the result of intensive breeding work.
From 1924 the Dutch farmers can read all about the available races in the yearly 'rassenlijst'.

By the kweekersbesluit the farmers should become only the best sewing seeds. Also the grower becomes 'rights', in order to stimulate their work.
(From how many small, regional grower companies in 1941 we came to the few worldwide right now; well this is another project to study, I.B.).

Summary of this article
(follows)